Jeffrey L Reaves is a native of the Bronx New York. Born to the parents of Rev. Hubert and Bettie Reaves. Bishop Reaves is a product of the New York school system.

Upon graduation he furthered his education at Bronx Community College, Virginia State University, the New York Theological Seminary, and the University of Richmond.

Accepting the call to ministry in the fall of 1977, and licensed in January 1978, Bishop Reaves has now been preaching the gospel of Jesus Christ for the last 41 years and pastoring for 25 years.

Additionally, Bishop Reaves has been privileged to serve the Kingdom through the following local assemblies; Sharon Baptist Church, Bronx, New York; Little Zion Baptist Church, Carson, Virginia; and for the last 23 years he has served as the Senior Minister of the Good Shepherd Baptist Church in Petersburg, Virginia.

Bishop Reaves has been the recipient of numerous awards throughout his ministerial career. He has served on the board level of the Baptist General Convention of Virginia in the areas of Christian education and evangelism.

In July 2016, the Global United Fellowship and its Presiding Prelate, Bishop Neil C. Ellis consecrated Pastor Reaves to the office of Bishop in the Lord’s Church.

A sought-after preacher, revivalist and teacher, Bishop Reaves is in great demand as his gift has made room for him has brought him before great men.

Bishop Reaves is a man of great humility. He regards 1 Timothy 1:12 to be the scriptural text that sums up his personal perspective of ministry.

"And I thank Christ Jesus our Lord, who hath enabled me, for that He counted me faithful, putting me into this ministry ".

Bishop Reaves is married to the former Ramona Tynes of Brooklyn New York and they are the proud parents of two adult children Jeffrey Lindel II and Jasmine Lanell. 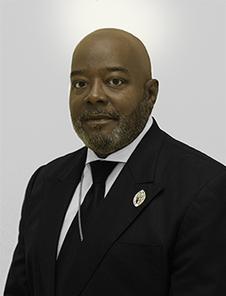 The Good Shepherd Baptist Church was organized between 1930-1933 by the late Reverend Emmitt Peterson. It was located in a house at 515 St. Matthew Street as a Christian Mission.

Reverend Peterson relinquished the leadership of the Mission to his son-in-law, the late Reverend Elijah E. Hicks, in February 1936. Reverend Hicks, desiring to organize a Baptist Church, moved the Mission in July 1936 from St. Matthew Street to the corner of Bolling Street and Virginia Avenue. 921-923 Bolling Street, a double tenement, which was converted into one large room for worship and other church activities.  On December 8, 1936, Church Recognition Council was called to accept the Good Shepherd Mission as a Baptist Church. Because the Council did not recognize it immediately, the Mission was not granted status as a Baptist Church until March 11, 1941. Reverend Hicks served as Pastor of the church for thirty-six years (1936-1972). During his tenure, the church experienced a new awakening. Between 1936 thru 1972, 18 new ministries were added to the church. Some of those ministries were a Senior Choir, Missionary Circle, Deaconess Board, Young Sounders, Men’s Choir, Pastor’s Aide and Pulpit Aide.

Upon the retirement of Reverend Hicks, the Reverend W. Benson Thomas became the second Pastor of the Good Shepherd Baptist Church on September 9, 1973 and was installed on November 11, 1973. Under his leadership, the church became a member of the Baptist General Convention of Virginia and the American Baptist Churches, USA, Region of the South. The church was granted provisional accreditation by the Association for Clinical Pastoral Education, becoming the first black congregation in the nation to serve as a training institution in theological   education and ministry development. In September 1974, a groundbreaking ceremony was held for the preparation of a new building. On March 23, 1975 service was held in our new church, located at 515 Virginia Ave and was dedicated to the glory and honor of God. On April 20, 1975 the cornerstone of the church was laid during a special service. In September of 1980 the ordination service of the first two female deacons (Rosa McKinnon and Annie J. Loftin) was held. Also on September 26, 1982 a service was held for the burning of the bond.

In December 1987, Reverend Thomas resigned to become a full-time Clinical Pastoral Education Supervisor. The Reverend Doris R. McCray served as Interim Pastor of the church during its transition (1988-1990).  She held strong to this one thing, “If the Lord called you to do a thing for Him, then there is nothing left, but to do it. Yes, the way may be hard, but there is no turning back and never should you compromise your salvation for worldly gain. Trust in the Lord and He will strengthen you and guide you.”

In August 1990, the church called the Reverend Dennis Ray Everett, Sr., a native of Louisiana, as our third Pastor. His dedication to the ministry provided many days of spiritual guidance during his tenure. Rev. Everett accepted a pastorate at his home in Shreveport, Louisiana in the fall of 1992.

With the departure of Rev. Everett, our Associate Pastor, Reverend James Byrd, along with Dea. Clyde Pender, Chairman of the Deacons Board diligently carried on the duties of the church.

In 1994 the Reverend Jeffrey L. Reaves, Sr. accepted the call of the church, as Pastor-Elect.  Reverend Reaves is a native of the Bronx, New York. He came to us from Little Zion Baptist Church, Carson, Virginia, where he was Pastor for eight years. At the age of twelve, he sensed the calling of God upon his life to preach the Gospel and at the ripe old age of seventeen accepted and acknowledged His calling.

Good Shepherd experienced a rapid increase in membership under the leadership of Pastor Reaves which required a larger space. The old Kmart and Sun Supermarket building on Crater Road were acquired. In April 2006, Good Shepherd Baptist Church moved from 515 Virginia Avenue to 2223 South Crater Road.  On July 30, 2006, a dedication service for our new edifice, of over 68,000 square feet, was held.

Good Shepherd seeks to meet the needs of a changing community and to meet the challenge of its problems. Good Shepherd Baptist Church continues to extend its experiences and resources to achieve effective leadership and discipleship as we seek to Build a Church, Develop a Community, Expand our Services and Impact Lives. 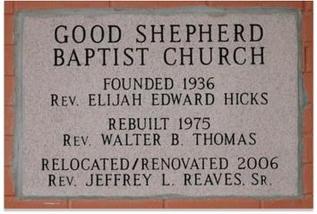